What a lovely day! I am here in Colorado. I arrived safely and uneventfully, just the way I like it. I did figure out one fairly important item that I forgot, but it's manageable. Other than that, things are great!

Last night I had dinner with a bunch of friends from conferences past. Several of the guys cooked, and it was a really nice way to relax and see people. We had salmon which had been caught just the day before by one of the guys! Impressive, and delicious. I had a very good time hanging out with the boys, but I was especially pleased when my fellow geekstress finally arrived with her family. A perfect completion to the day.

The Geekstress looked at me and smirked, "That's a lot of thingies!" She paused, then added, "But it makes sense, since we're the only girls here...."

Eventually I said my goodbyes and walked back to my condo. My condo is nice, though not as amazing as the one I had last year. Last year it was really an amazingly lavish apartment, while this year it's more like a quite-nice hotel room. I do still have a wood-burning fireplace though, which I will have to use sometime soon. Hmm...perhaps even with another Marshmallow BOF? We'll see.

I settled into bed with a book next to me, but I didn't bother to pick it up. I was sleepy! It was midnight CO time, which means 2am for me. I quickly fell asleep.

I woke up several times in the night to use the bathroom, because I've been forcing myself to drink tons of water. (They say water helps prevent altitude sickness, and we're at around 8500 feet. I definitely suffered from the altitude and felt very sick to my stomach the first year I came here, and last year I caught a nasty cold, so I'm hoping this year I can avoid both of those things.) Anyway, despite the many bathroom trips I kept going back to bed.

Somewhere between 8am and 9am, I started getting uncomfortable and antsy. I decided it must be time to get up. I got up, had a zone bar for breakfast, and drank some more water. I read my friends page for awhile, then started getting sleepy. I fought it for awhile, then I realized: why not just go back to bed? So I did, and I proceeded to sleep even more soundly than I had at night, for the next three hours or so!

When I finally decided to get up the second time, I just felt sooooo good and rested and refreshed and happy. What a great night's sleep! I don't think I've slept for that long, and that well, in... I don't remember how long. Weeks, months? I dunno, but boy did it ever feel great!

Today is a beautiful and sunny day, much clearer than yesterday, and the snow-capped mountains stand out clear and crisp against the blue sky. Mountains amaze me: we don't have things like that in Michigan! I attempted to take a treo-pic, but I'd forgotten to charge my phone last night in my sleepiness. Now everything is charging away, so I'll take one soon.

This afternoon I registered, had some pizza, took a couple of walks around the lake, and fed the ducks. There's even a muskrat swimming around in the lake, chasing the ducks! Must pull out the camera tomorrow. Maybe I'd better attempt to take that picture of the mountains, before the sun sets. It sets early up here. Then I have to go through all of the scheduled panels and decide what i want to attend tomorrow. 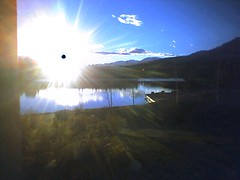 Keystone Sunset
Originally uploaded by Renniekins.
I don't know why I took this picture directly into the sun, I guess I just wanted to see how it would come out. Or if it would come out. You can still see some of the Colorado mountains.

I've always listened to my elders and never looked directly into the sun, so I had no idea that the sun is actually BLACK at the center. Fascinating.

I could have taken a cleaner picture with my better camera, but for some reason I wanted a Treo sunset picture. So here it is. Neat!
Collapse