We were in line at the sunday buffet table, and somebody dropped a cube of cheese onto the floor. "Oh! Five-second rule!" I told him as he bent to pick it up.

He looked at it, then put it back on his plate. "You must have little ones," he told me, as he critically inspected the cheese.

"No....why? Maybe I learned it when I was a kid, I don't know. I feel as though I've always known it. That and the process of blowing off the germs, or shaking them off, after you pick something up off the floor."

"Or running it under the faucet!"

"With soap and water."

"The thing is," he said, trying to direct the conversation back to his initial point, "it's just that I've only heard of the "five second rule" from people with little ones."

"Perhaps it's just because I still am a little one."

The guys all nodded at that realization.

(slightly-related: our waiter at the Mexican place is 6' 11" -- aka six feet and eleven inches tall! Wow. He's almost two feet taller than I am. Wow.) 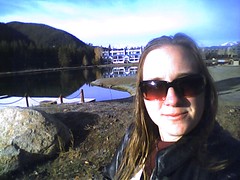 Morning on the Lake
Originally uploaded by Renniekins.
Day two has begun. Despite running late, I had to pause and take a picture. Then I saw frost on the back of the cars, so I had to stop and leave my handprint in one. Just to see how it would look.

Eventually I made it to the conf center, and I was relieved to see that breakfast was still out. My blueberry bagel and I still made it for the majority of the first session, on Web Services.

(Hmm, on uploading, you really can't see the prettiest mountain peaks, just by my head, the ones covered in snow. Guess the Treo blended them right into the sky. Next time, real camera.)

--
Sent from my Treo
Collapse