I'm home again, just flew in, and boy are my arms tired! har har har.... No reallly, my arms are tired. But only because I went swimming at the Polar Bar party yesterday. And my legs are tired! Because I went skating and swimming yesterday!

It was a really good day. Two final sessions, both useful. Then the conference wrapped up at noon, then a handful of us drove to Breckenridge to go ice skating. It seemed like a good idea when we P first suggested it, but then I realized I didn't have my own skates. I'd have to wear rental skates!!! *the horror*

Imagine you're a woodcarver, and you have to work with an old rusty knife of somebody else's. Or imagine you're a musician, but all you have is an out-of-tune upright piano that you've never touched before. This is how I feel about rental skates.

So I started having second thoughts, and wanting to back down. Then other people decided to join us. It had become an event, and here I was chickening out because I was being a skate snob. That's no good, so I went anyway.

I tried not to be a skate snob at the rental place, with limited success. ("I thought you said these were sharp! This isn't sharp, this is pathet.... sorry, never mind.") The skates really weren't that bad though. Better ankle support than I'd expected, and at least there were edges on 'em, even if they were dull. The first pair was too big, and eventually I traded them in for a smaller size. The smaller size was sharper (yay!), but the left blade was off-center, oddly enough. Felt really weird, and occasionally tripped me up.

Anyway, once I moved past my skate snobbery and my discomfort of using skates that weren't perfect, I started having fun. I got the feel of the skates, and found I could do a bunch of stuff fairly well, even if it wasn't as well as I usually do. I'm basically an attention whore, even though I try to pretend it's not true. So I was able to show off a little, do some tricks for my friends. They seemed to enjoy it, which I loved of course. I also gave out some tips and suggestions, because I enjoy teaching.

We all had a great time, in the end! We skated for about two hours, talked, laughed, fell, got up, and kept skating. We all agreed that we should do it again next year, except on sunday instead of friday. Next year, I'll bring my skates.

After skating, I went to my condo and lit a fire. My butt was cold! At the end of the session, I managed to get distracted while starting a backward crossover -- I looked over my shoulder and D, clicked my blades together, and fall quite dramatically onto my rear. (I blamed D, of course. *grin*) No problem, except that the ice was really chopped up at this point, so my jeans picked up plenty of snow and got soaked!

Anyway, after a couple of peaceful hours warming my butt (and the rest of me) by the fire, I rejoined the conference-goers at the traditional end-of-conference parties -- the first of which takes place in a hot tub and swimming pool.

There I rested my tired skating muscles in the hot tub, which was quite nice for awhile. Then they turned off the bubble-jets, which greatly enhanced conversation but wasn't as nice on the muscles. I enjoyed the conversations and fun for awhile, then I noticed that I was turning into a lobster from the heat! So I dove into the pool and swam around for awhile. (Note to self: be careful when diving while wearing a bikini.) 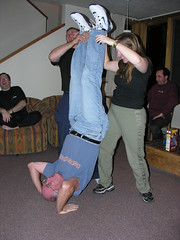 Upside Down
Originally uploaded by homeless one.
Anyway, the following pizza party was very silly and very fun, and it was a great way to unwind from the week's mental intensity. There was a complex and hilarious discussion that began with how to eat apple upside-down cake, then moved to handstands and ankle-holding, then nose-plugging, and eventually custom-made marshmallows. "Can be custom-fit for any orifice you choose!" I hope somebody hurries up and registers www.customfitmarshmallows.com -- before it gets snatched up. I'm sure its popularity will soar.

The next morning (this morning) I was full of energy and enthusiasm when my airport shuttle picked me up at 6:45am, as anyone can imagine. The trip home was long, but uneventful, and my kitties are happy to have me back. I'm happy to be back -- though sleepy.
Collapse