Saturday began quite nicely indeed -- breakfast in bed. Room service...now that's the life. Too bad you can't get room service at home. I suppose they call that "delivery"? But nobody in my area (that I know of) delivers breakfast in bed, especially not the kind that you can order the night before.

Actually, that might be a profitable business venture... but I digress.

After enjoying breakfast in bed with me, F went to go do a panel. I, on the other hand, decided to be lazy. At first I thought I'd actually try to get a bit more sleep, but I was too awake for that. Instead I spent a luxurious morning relaxing, reading, showering, and painting my toenails. Eventually my toenails dried, and I went out to enjoy the second day of the con.

I began in the con suite, of course, to grab a diet coke or two. I said 'hello' to a few people, then headed to the main floor with my laptop. I had heard there was free wifi in the lobby, and I was determined to find it. An access code later, and I was comfortably sprawled in a chair, feet over its arm, laptop on my stomach, checking my email.

Several friends wandered by, stopping to chat. Somebody mentioned that there was a bloggers meetup at 1pm, and asked if I was going. "I was thinking of it," I told him as I closed my laptop so I could see better and set my Treo aside, "but I was concerned it would be full of geeks." He just shook his head at me and laughed.

Eventually I did indeed make it to the meetup, even though I couldn't stay for all of it. Sadly, it was sparsely attended. Also, I've forgotten the names of all the people I met (whoops). But I did enjoy talking about the questions of "why do I blog", and "what do I blog about", which always interest me.

Then it was time to run off and change clothes for the Chuck Roast. Chuck and I had agreed to dress up for his Time Of Roasting, but I didn't want to look fancy too early. So I ducked out of the meetup, waved to a bunch more friends, then headed back upstairs.

Due to my rushed packing job, I'd brought tons of dressy clothes. I wasn't sure what I'd want to wear... eventually I settled on a simple black skirt, with a lacy purple top. It worked okay I think. I also wore a wool blazer, since I knew I'd get cold, and it's useful having pockets. A fancy new pair of purple heels, and I was ready to go. (hmmm. Must take picture of pretty new shoes.)

Some girlfriends and I had been working on a Top Secret Project for the beginning of the Chuck Roast. No, the Chuck Roast wasn't a secret. That was planned and scheduled in advance, because if the Fan Guest of Honor is

thatguychuck, and roast chuck is very tasty, it only makes sense to put together a traditional Roast for the con-goers' entertainment.

But our Top Secret Project was something extra.

rikhei came up with the idea, to sing a song in order to make Chuck blush. A few of us got together the week beforehand and composed a rather risque version of Drawn to the Fire from the Buffy Musical. The basic plot was a bunch of people longing for Chuck, but unable to have him. Then I would be agonizing and indecisive about going out with him, then in the end I chose to be with him. There were five girls singing our hearts out to him. I think he enjoyed it.

The song was well-received, and got a lot of laughs. I had to keep pausing between my lines to let the laughter die down! I was a bit startled to see how many people were in the room, but I just raised my voice in an attempt to be heard by everybody. I think it worked well, and I certainly had fun. 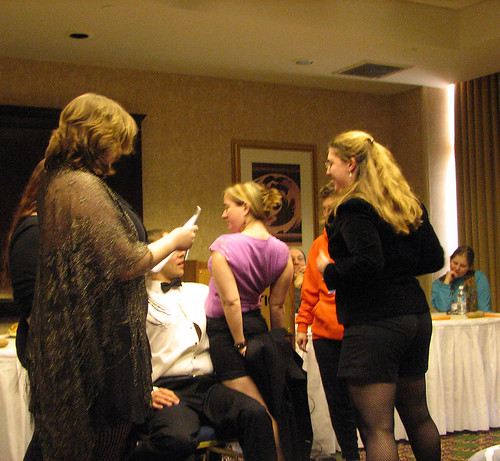 The rest of the roast is kind of a blur. I was so intent on making sure I knew all my lyrics (I had a lot of lines!), that when the song was over I just relaxed in relief. It was fun to sit back and listen to what various people had to say about Chuck!

It was... enlightening, to say the least. Actually it was really neat, and it was cool to see how many friends and stories he's accumulated. In some ways it was kinda weird and embarrassing, hearing some of the flamboyant stories of his "everybody loves chuck and chuck loves everybody" past. But I just reassured myself that he's chosen to be with ME, no matter how much craziness has or has not been in his past.

In the second half of the Roast, I spoke. My speech was fairly simple. I talked about how I couldn't be too cruel, because I had to see him again that night. Then I joked about mornings, coffee, motorcycle riding, that sort of thing. I was pretty nervous, especially since I'd lost the original notes for my speech so I had to make new ones last minute, but I think it went well.

But I was relieved when my tasks were completely over! The parts that didn't involve me were a blast, watching Scott dress up as Chuck, listening to all the silly stories, and generally enjoying Chuck's fun and discomfort. It was a unique but enjoyable experience, that's for sure.

I have a weird printer.

Whenever I (politely) suggest that it print something, it gets all upset. It whines, it jerks the paper back and forth, and generally makes a fuss. It eventually prints, and prints nicely, but it's never happy about it.

When not printing but powered on, it sulks and grumbles to itself. I have to turn it off as soon as I'm through using it, just to get a moment's peace.

I have weird cats.

I woke up from a little nap this afternoon (today's my Friday off), and looked around the room. They had ravaged a box of "girly" supplies I'd kept on a shelf, and there were pads and tampons strewn about the room.

The two younger kitties were spooning in my (still not unpacked) suitcase, squeezed in together, shedding all over my clothes, half-asleep. They blinked at me curiously while I frowned at them. I would have taken a picture, but my camera was somewhere underneath them.

I have weird dreams.

I have an irksome mole on my back, which my thumbnail occasionally catches painfully when I scratch my back. (This part is true, though the mole changed locations for the dream last night. The rest is not true, not at all, I promise.) I think I was at the con hotel. was scratching my back, and my thumb hit the mole. It felt especially large and weird, so I went to a mirror, turned around, and tried to inspect my lower-right back. Not an easy task.

The mole had grown and developed a hard exterior; it was bright yellow with small black spots! Disgusted and startled, I flicked at it with my thumb and jerked my hand away. The yellow shell popped off like an old scab, and fell on the floor. I looked on the floor, and there were a few ladybugs or beetles crawling around, whirring their wings.

I tried to look at my back again in the mirror, and it looked like the scab area was now enormous and white underneath, and... were there little black things in there? I looked at the bugs on the floor, and felt horrified and revolted. Had those been on me? Were there more??? I kept trying to look at my back, but I couldn't really twist around and see.

I started wandering around the hotel, simultaneously trying to find somebody to look at it and help me, yet trying to hide it because I was so disgusted and embarrassed, so afraid at what awfulness it might reveal. That's all I remember... what a disturbing dream!
Collapse