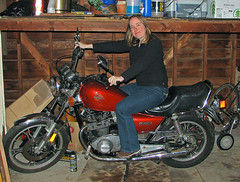 Okay, maybe that's not true. Your friends are probably nice too. But let me tell you about just a few of my awesome friends! Wednesday night, I went to the home of

murphyw (and friends) and had dinner with a bunch of delightful people. The dinner was delicious, and the cream puffs even more deliciouser. By the time I left, I had a fully belly, a new book to read, a tin of cat food for my babies, and a new motorcycle.

Didn't I tell you I had neat friends? Bill tried to warn me, that the longer you stay at his house the more you end up going home with.

Yes, that's right: I have a motorcycle! It still belongs to Bill, but he's letting me use it for the summer while he's off adventuring. It's an 85 Suzuki GS450L. It doesn't run well yet, but that brings me to another awesome friend,

thatguychuck, who is this very instant working on making it better! Hopefully before long it will be running smoothly, and I can work on relearning and practicing all of the skills I learned in my Motorcycle Safety class. I'm really looking forward to playing with it.

(If this post sounds a little giddy, it's probably because I'm sitting in Chuck's garage surrounded by gasoline fumes and other 'fun' stuff while he works.) Speaking of class, I went to the Secretary of State on friday and officially got my motorcycle endorsement put onto my license. So I'm legal now!

Then also on friday, I went to a little shindig hosted by

cannibal. That was cool too, although we didn't talk about motorcycles or bicycles very much. That's okay, we talked about other neat things, and played pool.

Last night I went to yet-another-party, this one involving all kinds of Stilyagi people. I saw a bunch of people I don't generally see, which was nice. I showed off my motorcycle to several friends, including

davehogg who kindly photographed me on it. Nifty!

This morning I woke up late and stumbled blearily into the kitchen. I was hoping I could find a diet coke left over from the previous night's festivities. Chuck's roommate

matt_arnold entered the kitchen, and I mumbled a hello. He eyed me critically, my rumpled hair and half-closed eyes, and asked, "Do you drink coffee?"

When I said yes, he asked if I would like a cup. I closed the refrigerator door. "I would love one, thank you." After some excellent coffee, the morning progressed much more smoothly.

So it's been an eventful and friend-filled weekend. If only it would last longer.... I still have one more friend's house to visit this evening, and then (alas) tomorrow it's back to work for me.

(edit: re-posted because I didn't do it right the first time. And I added my motorcycle-class icon.)
Collapse