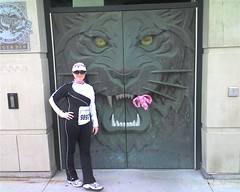 Detroit Race for the Cure
Originally uploaded by Renniekins.
The Race for the Cure was a great success! Over 30,000 people swarmed downtown Detroit, all united for the common cause of helping beat down breast cancer. We "raced" (although my group just walked) 5K, all around downtown and the new Tiger Stadium.

I personally raised $643... thank you! Here I am pausing in my race to pose with a pink-ribboned tiger.

(Additional note: more pics and a "day in the life" writeup here) 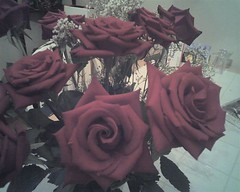 Birthday Flowers
Originally uploaded by Renniekins.
My boy had roses sent to my office last week on my birthday. What a totally unexpected surprise!This post is a bit late, but I still wanted to save the pic and remember it.

Okay, one more post tonight. This was a weird weekend. Lots of good and bad.

It started out stupendously, with the Race For The Cure, which I always enjoy. Plus my boy joined us this year, which was neat! But a couple of the other people who always join us had somehow gotten up on the wrong side of the bed. Things were a bit grumpy and tense before the race began -- fortunately I managed to get more into the proper mood as the walk progressed.

A. mentioned that she felt the walk was rather depressing, because so many people had signs with their dead loved ones names on them. I pointed out to her that although some of the signs said "In Memory", but LOTS of them said "In Celebration". And those signs meant they were celebrating the life of somebody they love who is STILL ALIVE right now, continuing to fight and live and SURVIVE! Like my mom, six years cancer-free.

Then I pointed out that every woman who was wearing a pink shirt and cap was a cancer survivor. The walk wasn't about mourning. It was about celebrating the lives of the survivors, helping raise money and awareness to let more people survive, and ultimately helping scientists to find ways to defeat it altogether. And for thse "In Memory" signs? Well even those walkers were doing something beautiful and important with their loved ones' memories, instead of just letting the mourning poison their lives.

I don't know if she was convinced. But to me, I think it is a great and beautiful thing, to see all of those over 30,000 people united in a battle against this disease. I like to see who they're walking for and why. I like remembering that this is about friends before it is about money, and it is about love before it is about statistics.

My walking team all had lunch together at Twingos after the race. Quite yummy food! I think C's order was the winner: mushroom crepes. Though my fritatta was good too.

Then we parted ways, because Sis and I had a baby shower to attend. We cleaned up, filled a bag with tiny baby clothes, then headed to the restaurant. The shower was in full swing already, but we'd warned them we'd be arriving late. We sat around and talked with skating buddies, oohed and aahhed over tiny outfits, then eventually headed back home. We made out with extra door-prizes somehow -- I got two towel-bunnies, a pretty candle-holder, and a stationary set. Not bad, for a shower I missed half of!