My New York trip over the weekend was quite the whirlwind of chaos. I'm only now starting to feel recovered from it! But it was also wonderful, with lots of family time. My family is special to me, and I don't see many members more than once a year. So it was good to spend time with everyone. Even though we spent a lot of time switching from place to place for just 48 hours. (Detroit, Laguardia, taxi, Aunt E's place, Aunt E's car, New Jersey, hotel, Aunt R's car, party hall, Cousin J's car, bar, hotel, breakfast, Aunt E's car, Grandma's house, Dad's car, JFK, Detroit. Whew!)

My sister and I flew into Laguardia late friday night. We hopped into a cab, and this driver really knew his stuff! He tore through the streets and around the obstacles, much more quickly than I've seen done before. I was impressed.

Arriving at the Upper West Side, we retrieved our key from the doorman. ("Actually, he's a security guard," said my aunt. "He won't open the door for you." But I found that he did generally open the door for us -- even if was only by pushing a button at his desk inside.)

It being after midnight, we tip-toed in with the minimum amount of noise that can be made by two girls weilding rolling suitcases and a few additional bags. We quietly rolled into the spare bedroom and unpacked a few night-items.

At this point in the story, I should provide a bit of history. My uncle has been struggling with Parkinson's Disease for several years, trying to find the right balance of medications. Right now he has trouble with dizzy/fainting spells if he lies flat. For this reason, my aunt and uncle have propped front of the spare bed on blocks of some sort, to give it a significant downward slant.

My uncle also has trouble changing positions -- rising from a sitting position, for instance. Strong Parkinson's will actually lock muscles, making standing up very difficult. For this reason, they recently tried fitting the spare bed with satin sheets. They are very slippery, and it is hoped that they will enable him to just slide gracefully out of bed.

Crawling into bed that evening, I assessed the situation. "Who would put slippery sheets on a slanty bed?"

As I tried to settle in, I changed positions several times trying to get comfortable, and felt myself slowly sliding down the bed. I wiggled back up, and I found my head slipping off or down the pillow. The slippery pillow, incidentally, was about the size of Mars. It was so large that it was practically floating above the satin bed.

Fortunately I found a second pillow, more normal-sized, and not slippery. With my head anchored on the cotton pillow, I was able to maintain my position in the bed relatively well.

The covers, on the other hand, had more trouble. The sheet kept sliding down off of us, and the blanket above it tried to escape off the end of the bed whenever we accidentally let go.

Several times through the night, I woke up cold. I would notice that the covers had slunk down to near my hips, so I would grab handfulls of the sheet and the bedspread, pulling them both up over my shoulders.

It wasn't until morning that I noticed I had missed the blanket inbetween, and it had managed to slide between the bedspread and sheet, all the way off the end of the bed!

It was a strange and slippery night. I've never had that much trouble staying in bed before.

The next morning my sister and I made the bed together, which proved to be quiet a challenge all by itself -- when we'd tuck the sheet under the mattress, the whole mattress would slide to one side or another! We joked about it with our uncle, asking him what he thought of the satin sheets.

He shook his head. "You know, I think I've only tried that bed once or twice. Satin is supposed to be fancy, but I just don't find it comfortable."

"Well the darn sheets are so slippery!"

"I know," he said, "and they're hard to hold onto. You can't even put them in the closet. You set one on a shelf, and it just slides right off onto the floor." 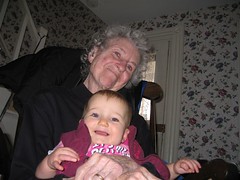 Over 90 years apart
Originally uploaded by Renniekins.
My grandmother with her great-grand-daughter (my neice). One is ninety-one years old, the other has only 10 months.
Collapse