Yesterday I attended a local cheerleading competition. My Little Sister was competing, representing her community team that consisted of around 40 girls. There were 24 teams in all -- not all of the teams had 40, but all told there were still hundreds of screaming little girls in makeup and fancy hair, running around with pompoms. Not to mention their families!

All of this said, it was not as scary as I'd feared.

Actually, it reminded me a lot of synchro and figure skating competitions. It's the same basic concept: trying to remember your dance, wearing elaborate costumes and makeup, competing against other children, parents cheering on their daughters, cheering for your friends, performing, tension, and fun.

Here (unlike skating), every kid got a trophy. Everyone's a winner, everyone worked hard, etc etc... But it was still a competition, with ribbons for first/second/third. "Our" team took second place, which was a thrill for everyone. This is her first year doing this, so it was great to see her place! This also means her team gets to go on the the regional competition. She was pretty excited about the whole thing.

The interesting thing is that I don't generally like cheerleading. I don't like the concept of a organization around being the one on the sidelines, cheering for other kids who are playing a game. Especially the traditional cheerleader concept of the girls on the sides cheering, while the boys are the "stars". I'd prefer that girls play their own sports instead, and be the ones on the field being cheered for!

This was different though, as it was all about competition. Each team did a dance and a cheer. There were no "others" being cheered for, it was just the teams cheering and competing for themselves. Like I said, not much different than the skating competitions I grew up doing. That's good, because I felt no discomfort encouraging and supporting her in that.

Although honestly I'm not sure why she's into cheer. She is not one of those bubbly cheerleadery personalities. She's not a girly-girl, and she doesn't show a lot of enthusiasm for... well... much at all really. I think she's at an age (12) where she's a little too cool and embarrassed to get excited about stuff, even though she's really still just a little kid inside.

She doesn't like skirts or makeup, and her favorite color is camouflage. When they were done with their cheer, the kids are supposed to just bounce, kick, wave pompoms, and basically look enthusiastic then run off the stage. My Little did the dance as she'd learned it, and she did it nicely, then she just stood there when it was over. "Yep, I'm done now." All the other little girls squeeled and waved like -- well, like cheerleaders.

Oh well, for whatever reason, this is what she wants to do anyway. It must fill something she needs, even though it seems to me like it doesn't really fit her personality. Maybe it's just a need to do what the other girls are doing, I don't know. Maybe she'll eventually switch into basketball or soccer or something with less bubbliness. Or maybe there is an excited cheerleader hiding somewhere inside of her. Who knows? It's good to see her working hard toward a goal, participating in a team sport like this, whatever the reason. 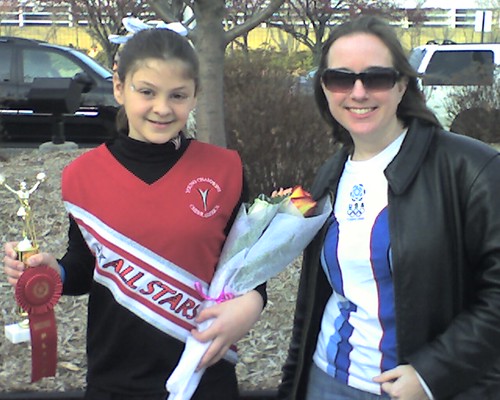