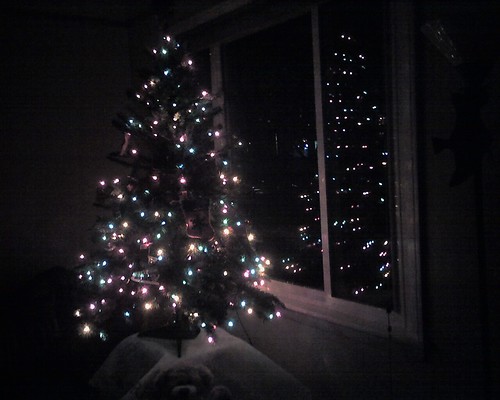 My Queen Tree stately admires herself in the mirror
Originally uploaded by Renniekins.
It ain't much, but she's my tree.

When it became too much for me alone, I dug in deep and asked a friend for help.

Note to myself: it actually works very well!

(Edit later: wow, this post got mangled on its way from my Palm to the 'net!)

Random thoughts on my third mammogram:

This place is exclusively for breast imaging. It's kind of nice having "our own place" to go for this. Folks are pretty nice here.

These gowns are pretty clever in their simplicity, although I have to say that none of us in this waiting room look very sexy.

They've got a checklist where you can mark off symptoms, with two columns - one per breast. Except... The left column is for the *right* breast.

There were several men in the outer waiting room, all reading newspapers. I'm assuming most, if not all, were there to wait for a woman, whick I think is pretty cool.

Martha Stewart is on the television, and she is showing off a fancy nativity scene that she made of pottery while she was in jail. She said each inmate was only allowed to make one per month, but she managed to convince them to allow her to do more than that.

I'm currently in the inner waiting room, waiting. The physical discomfort is over. It's cool that they'll give me the results now, without making me leave not knowing.

I'm pretending I'm not nervous. Heh. But I won't post this until I leave, so nobody reading this will have the same suspense as I have.

This inner waiting room is filled with women in regular pants with frumpy gowns on top. We tend to catch each others' eyes then look away, exchanging tight half-smiles. Nobody speaks, everybody sits in their private waiting world.

One woman gets called back in; they want to take an additional image. When she returns I glance up and see the fright in her face. I drop my eyes. I don't want to intrude on her discomfort.

My verdict is in: everything looks okay. I am healthy and free to go. I put my top back on and go to work.
Collapse