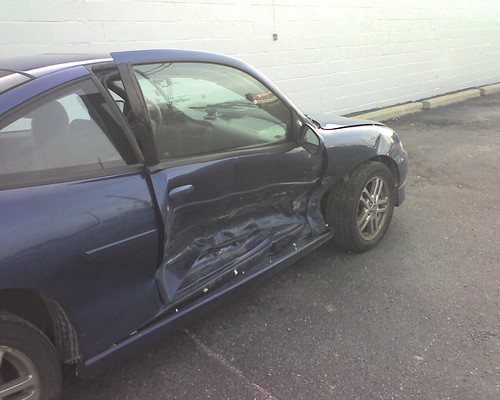 Bad Day
Originally uploaded by Renniekins.
Somebody smashed my car. Fortunately I'm okay... Thank God it was the passenger side, and I had no passenger.

I know it was a Saturn, because the little logo plate was in the center of the crater. (Well that plus he stopped.)

I got a "written warning" because officially I failed to yield. But it's just a warning because traffic was such a mess then, it wasn't obvious who should go where.

Also, I have a cold. sigh

Quick Summary: I'm okay, but my car is not. Longer Version: I was heading W on 11 mile; I'd just crossed the freeway, and I was turning left onto Stephenson, the I-75 service drive (north).

I turned a slow left, following the car which had just done so, easing my way through the hole in stopped traffic. As I completed the turn, suddenly I heard a screeching of brakes. I didn't even have time to formulate a complete thought, just something along the lines of "Oh no, I hope--", and the oncoming car in the right lane slammed into me.

I'll admit I was pulling out my cell phone at the same time in order to dial into a business conference call, though not talking yet. But I'd thought my light was green, and I'd thought all the oncoming traffic was at a stand-still anyway due to rush hour. I didn't see him at all. I'm guessing he had just swung into the right lane, since the left lane was stopped. Or maybe he was there all the time, just blocked from my vision by the stopped cars. Why would the right lane be moving so fast, with the left lane stopped? I don't know. He says his light was green.

He hit me at a completely perpendicular angle, on my passenger side door. For an instant, I felt the surreal sensation of my body staying still while my car slid out from under me. Then I was jerked to the left along with the car, and we skidded at some kind of angle to both of our velocities.

It felt almost like a rollercoaster, except for the nasty smashing noise.

The actual accident is mostly a blur, except for the body memory of inertia in action. I found myself driving forward after it was done, the car still moving okay. I kept going for a moment -- unsure of where to pull over. I turned right onto the first side street and stopped the car.

As I climbed out, a van with two guys in it pulled over and stared at me, stared at the car. It felt like they were gawking, but I suppose they were just making sure nobody was injured. They didn't talk to me or stop once they saw I was walking.

I walked back to the scene, and another guy approached me. He said he'd been turning left behind me and seen the whole thing. "Where's the guy who hit me, did he drive away?"

"No, he's pulled over in that parking lot. Somebody's already called the police for you." I meant to ask him if we'd had a green arrow, but was too distracted and frazzled. He left before the cops came; don't know if anybody got his information or not.

I found the guy who'd hit me, and he was on the phone. We didn't exchange more than brief words, though we both talked to the cop when he came. It was cold, we were probably both pretty shaken, and honestly we didn't have much to say to one another. The cop told me it was okay to drive my car, so I pulled it around the block to where the other guy was.

I called my office and my insurance company, then I called my boyfriend. The officer came over and gave me a "written warning". I had failed to yield, but the circumstances were poor and my record was good, so I didn't get a ticket.

My insurance company (Progressive) was helpful and responsive. I drove my wounded car there (which was very cold since the passenger door has a six inch gap between it and the roof now), and they had me driving to work in a rental car before one o'clock -- less than four hours after the accident.

Unfortunately I have already found out that they are totalling the vehicle (meaning that it would cost more to fix than the car is worth), so I have to buy another.
Collapse