This morning I was driving to work, and the van in front of me and I both turned right onto the same side-street. The van stopped just after having turned, just rolled to a stop pulled over to the curb. Annoying... I paused for a couple moments then started to go around it.

As I pulled around, I saw a car coming (slowly) the other way! Oops. The side streets here allow parking on both sides of the street, and they are narrow, so sometimes there is some maneuvering to get everybody through.

Anyway I just put my car in reverse and allowed the forward-coming car drive past. (yay for quiet residential streets) The car was a weird-looking VW bug with a bit advertisement for "Pest Control" painted on it.

It wasn't until I said it out loud that I got it. "Oh wait.. a bug, pest control... that's kinda clever!" It was still weird-looking through. Strange colors.

At work yesterday a coworker said to me, "Captain America is dead."

He was reading MSNBC online. "They're killing Captain America in the last issue of the comic book."

"Wow." I stared at his screen sadly. "Captain America dead... I can't believe that's in the news."

I had a mole removed from the bridge of my nose last week. It's healing up nicely, although my nose still feels weird.

It was annoying, right there on the top of my nose. I never liked it, and recently it's gotten more annoying. I don't know if that's because it's grown bigger or I've become more impatient, but either way it's gone now. (It's being biopsied, but I don't expect they'll find anything.)

I showed my sister and brother when I was in Chicago. "Oh, I never even noticed it was there," said my brother. I think most people didn't see it, but it always bugged me. I spend more time with my nose than them, after all.

My sis said that she had observed it though. "Probably because I have a mole on my nose also. You might have noticed it."

Well yes, I think it's obvious. But maybe just because I'm family? As I pretended to claim I never had noticed it, she went on, "But I always took secret comfort in the fact that yours was worse."

I laughed. Sisters! But now I win, because I have no more nose-mole, and she still does. Cool. 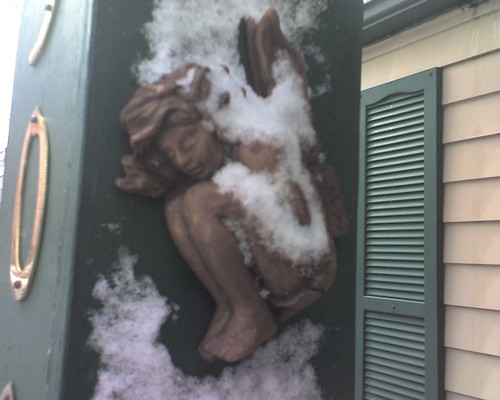 She looks so cold!
Originally uploaded by Renniekins.
Collapse