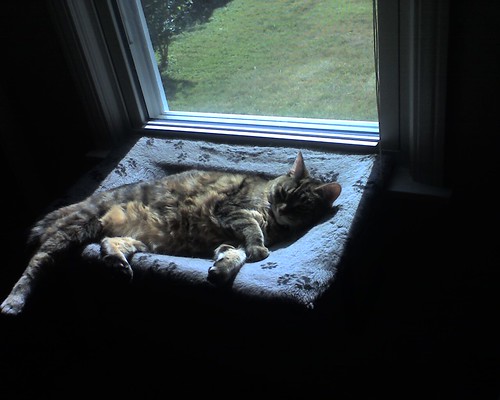 I posted this as a comment, and thought it was amusing enough to save here.

Strange fact: my niece and nephew prefer to eat with forks. Maybe it makes them feel like grownups, I dunno... but we were having lunch at one point, and they were both clutching forks (grownup forks, not kid ones, almost bigger than their heads!) in their little fists, tines pointed straight up. I wish I'd snapped a picture.

Then Will proceeded to eat chicken nuggets and Tilly ate strawberries, each with forks. Tilly, 18 months, was especially cute because it took great concentration for her to carefully spear a strawberry with the fork, then maneuver it to her mouth. Will (4.5) had trouble sometimes with the nuggets, but if one fell off he would pick it up and put it back on the fork.

These kids are very determined. Me, I was eating my pizza with my hands -- so lower class!

More kid facts while I'm thinking of it.... Will writes his name, although it's a bit challenging. I never thought about how tricking a "W" can be just starting out. He seems to tackle it from the middle then out, adding lines until it's done. The "I" he starts with the dot first. Most of the time the letters end up in order.

Matilda, while coordinated enough to use a fork, still doesn't talk. I'm sure it will come with time. She's adorable and very good natured, smiling all the time, and very cuddley. She likes to run, look at things, and play with anything her brother is doing. They both really like drawing and painting.

I got a big jar of bubbles, and we went out after dinner one night to play with them. There is a nice little closed in backyard behind my parents' apartment. It was fun! Will and my sister and I were taking turns blowing the bubbles and chasing them. We were laughing and leaping around, trying to catch them, shouting and having a good time. Tilly was having an equally good time, running about and making noises She thought it was all good fun, though she had no idea what was going on. The bubbles switched to a game of hide-and-go-seek, which mostly involved a lot of chasing. Tilly kept running and occasionally letting out a good yelp. We were all clearly happy to be active and loud outside after a long and relatively quiet day.
Collapse