Sometimes there are stories so unpleasant, I simply don't want to write them. Rather, I prefer to pretend they aren't there at all. It turns out, however, that even issues avoided don't cease to exist.

This tale I don't wish to tell began in late summer. If I have seemed silent or reserved since then, this is why. In late summer, I was an a vacation for a week. The following week, my entire work team was in Ann Arbor for a training session. Not one of us visited our home office that week.

It was toward the end of the week that it occurred to me to wonder: what had been done about our pet hermit crab team mascot junior programmer during our absence? I had not been there the friday before, or I would have insisted that he come to Ann Arbor with us. Or at least that one of us took him home for the week -- but it turns out my vacation and my coworkers' absent-mindedness had a high cost.

When I got back to work on the following monday, the first thing I did was check on Lobster. His crabitat was completely dry, and he was curled up tightly in his shell. I fetched him a new cup of water, filled his water and food shells, and drizzled water around his house to humidify the air. I picked him up and gave him a bath (this involves dunking him in a cup of water and sloshing him around a bit).

Naturally I only slosh him about for a second or two, then I pull him out to let him breathe. I was concerned about his health, so I dunked him multiple times until he finally poked his head out of the shell. He was alive! Relieved, I put him back into his house and left him alone.

Awhile later I glanced in on him. He was out and about, crawling around on the top of his coconut-shell-hut. I was happy to see this, as I'd been rather concerned about his well-being. He was in fact looking more active and cheerful than usual, instead of less! We waved at one another.

As I was leaving work that way, I looked in on him again -- and got an unpleasant surprise. His shell was in one of his usual places, between the coconut and the wall of the crabitat. Underneath the shell on the sand was.... something that looked suspiciously like a naked crab.

"Oh dear," I thought. "Well, maybe he's just resting. Or perhaps molting. He came out of his shell last time he molted..."

I pushed his crabitat into a quiet shady part of the desk, and went home.

The next day I noted that he was still there. "I'm a little worried about Lobster," I told Irish and Daisy, showing them.

"He's dead," pronounced Irish. "We should flush him."

"I'm not so sure of that. I know he doesn't look well, but I'm hoping he's just molting or something. Remember when he molted before? We thought he was dead, but he got better?"

"That crab is dead." Daisy agreed.

"Maybe he just needs a little time, let's leave him alone just in case he revives. Hermit crabs shouldn't be disturbed when they are molting."

Later on that afternoon we were downstairs for a meeting, and one of our associates there asked me, "How is your little crab doing?"

"Actually he's somewhat ill," I responded. "We're all worried about him."

Irish overheard me. "He's dead, it's a dead crab."

"No he might be just sick, I'm still hopeful."

I think I was out of the office the next day for some reason or another. When I returned the following day, there was an empty space on the desk in the corner. "Oh no... Lobster?"

"He was dead. He was starting to smell. Sorry, but the crab's gone."

"What did you do with him, did he get a proper burial?"

That's the sad story I've been avoiding, the end of Lobster.

Fortunately the story does have a happy ending, because the circle of life continues. Although I don't have Lobster's crabitat any longer, a couple of good friends of mine thought of me and Lobster (RIP) while on vacation a little while ago. They stumbled over a "Grow a Hermit Crab" kit, that expands in water!

This one doesn't require food, though he does require water.... but that's all he needs, and even if he gets out of water he regrows if he goes back in. With luck he will never die. Thus I introduce to you: Lobster Junior! The crab is dead; long live the crab. 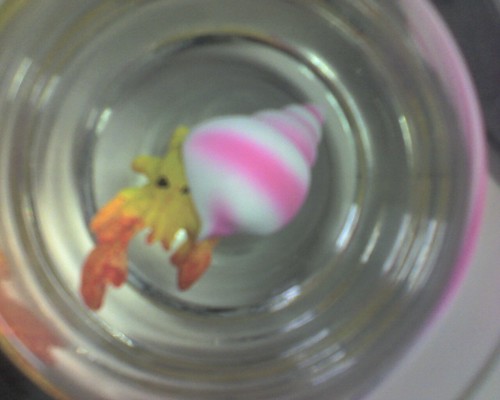