When my Euchre Girlfriends and I get together, it is almost always very late at night. Even if it doesn't start as late, it certainly ends up that way. What this means is that, as the night progresses, our brains get more and more fried. Fortunately we can all play euchre in our sleep (and I'm sure we have before!), but it does make it hard to remember what trump is.

Many months ago, during one of these late-night sessions, this subject came up. Our friend 'Stine had had a "trump cube", a wooden cube on which her mother had drawn the suits in magic marker. You just turned the cube to display the correct suit, and nobody had to remember what trump was anymore.

We discussed how useful such a device would be, except that 'stine is no longer nearby enough to attend our euchre therapy sessions. Somehow as conversation progressed, it was determined that we would EACH make up trump cubes for our fellow euchre players, and give them to one another as Christmas gifts.

Thus it was that we each went to our respective homes, conniving to come up with some sort of unique trump cube to give out at christmastime.

I spent quite a bit of time thinking about mine. Because I am competitive that way, I wanted to come up with a concept that was totally different than everyone else's (and preferably cooler, even if in nobody's opinion but my own). The main problem that I see is: while there are only four suits in a standard card game, a cube has SIX sides. This makes two wasted sides, which bothered me. What to do? Pyramids, 4-sided dice? But I don't like that the 4-sided die sits on its flat surface.

One night when I couldn't sleep, I pulled out a pad of paper and began designing a complex architecture in which a 4-sided die is encased in a clear resin or plastic, giving its pointed bit a flat but see-through surface on which to sit. The idea was that you could set it so that the flat plane with the suit marked on it would be facing up, but it would still have only four sides.

Satisfied, I went to sleep. However a few weeks later when I started to contemplate materials for this project, I realized that I had set myself up with a really complicated engineering task. This would probably involve things like exacto knives, measuring, and trigonometry!

A bit daunted, I started thinking some more. What other four-sided three-dimensional objects are there....? A random link on wikipedia led me to my answer.

Four faces, a handle, and a tip for spinning. Perfect. This led me to a couple of amusing date-moments. First was when a friend and I were getting together, looking for something to do, and I was able to say "Well I need to go to the craft store and pick up some dreidels, want to come?"

He happily agreed, even while having no idea why I needed dreidels, and I explained the project on the way. Much to our dismay, neither of the craft stores we visited sold dreidels of any sort! I was planning on buying some and painting them. The funny thing is that each store had a "holiday decorations" section, which is a nice and polically correct name, which would have been fine except for the fact that ALL THEY HAD WERE CHRISTMAS DECORATIONS! That just made the name rather pathetic.

Stymied once again, I had to come up with a plan C. Fortunately there was a song to guide me, so I bought some modeling clay and paints.
This led to entertaining date moment number two, when a different friend came over to pick me up for a date. My oven beeped. He looked at me puzzledly. "Oooh, my dreidel's done!" Then I got the fun of explaining the project all over again ("please tell me why it is that you have a dreidel in your toaster oven?"), on the way to dinner.

Both of these patient gentlemen have since been given dreidels of their very own, incidentally. They are fun to play with!

After much labor, my dreidel project was finished. It was a lot of work, getting the faces relatively flat and the handles and points balanced enough that they can spin half-way decently. Then painting the darn suits carefully enough that they looked properly recognizable... eventually it all came together. I even gave them out in little Christmas stockings, to increase the irony. It was a really fun arts-and-crafts project, and it's inspired me to make more homemade presents in the future. 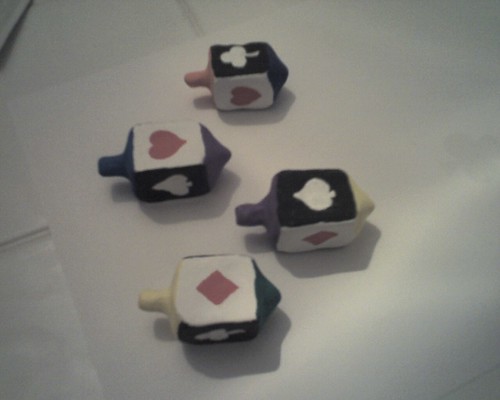 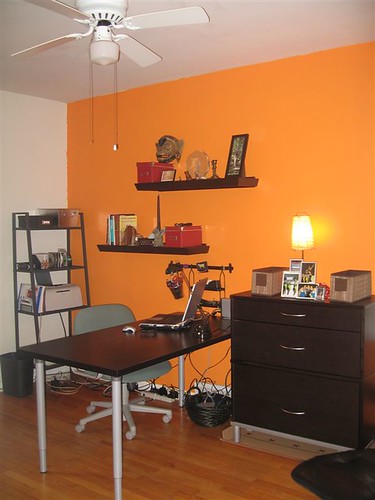 Office 2.0
Originally uploaded by javagrl.
My office rennovation project went very well, and today for the first day I tested it out by working from home. I have identified a few minor modifications required, but I'm still absolutely thrilled with how it came out.

Here I have FINALLY posted some pictures, so everyone can be as amazed by the new look as I am (these were taken a couple weeks ago, it's slightly different now but not very - primarily, I have added a couple more computers). We did one "highlight" wall with a rich orange color, and left the other walls as-is. (this may change soonish) We bought nice dark furniture from Ikea and got rid of a whole bunch of junk and extra desks. I think it looks lovely! I really enjoyed working there today.

Check out the Scary Before Picture. Seriously, we could have gone on TV with this makeover! 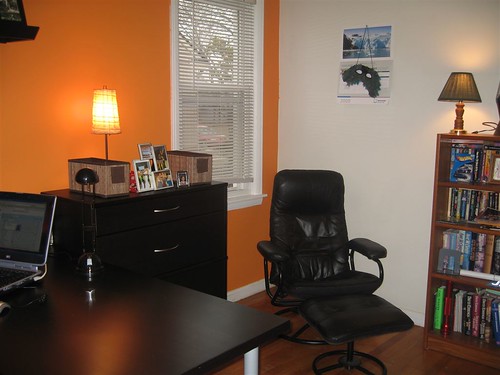 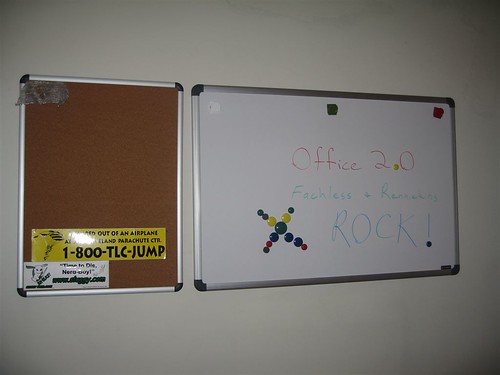