I thought everybody was aware by now that I now consider the alpaca to be my spiritual totem. However it's possible that I never mentioned it. In fact the few times when I have brought it up in recent conversation, I've received some puzzled stares and, dare I say, even laughter?

Ever since my first alpaca encounter back in september, it has become increasingly clear to me that alpacas and I share a special and mystical connection. The alpaca appears again and again in my life journey -- on bicycle rides, in vans, cider mills, and in other unexpected situations. Any time my life feels a little tired or meaningless, I turn around, and there is evidence of a gentle alpaca shadowing my steps.

I had begun to suspect quite some time ago that there was a closer connection between myself and the alpaca than there is with ordinary animals. Then about a month ago

sandygood stumbled across clear evidence of my growing kinship with alpacas.

Sometime last summer, I was at her house and she pulled out some modeling clay. I should note that this was months before my first alpaca encounter. I took some clay and started playing with it while we conversed. My fingers amused themselves while I paid them no real attention. I was not attempting sculpture or art of any sort: if anything I was just doodling with clay. When I was through playing I set the little thing aside. For one reason or another it was never recycled nor thrown away -- instead it dried unnoticed.

Not long ago SG found it again and realized the truth: my subconscious was already establishing its connection with its spiritual totem. Without thinking about it, without having even seen an alpaca in real life.... my fingers had formed one out of clay. Its shape is primitive, vague and ethereal, a shape without a fully-formed identity. However in retrospect, it is clearly the beginnings of an alpaca. 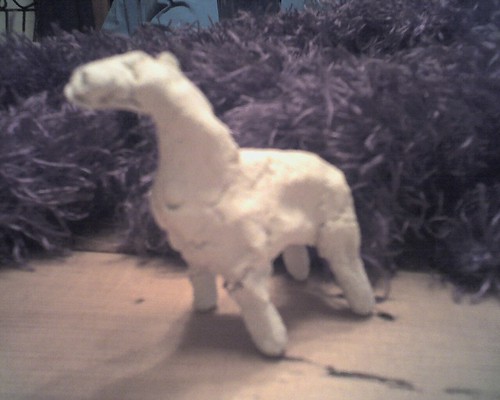 SG is not the only one to sense my growing affinity with alpacas. Recently

rmeidaking also took note of the connection. She was so stirred by the alpaca's mysticism that, when she stumbled across a skein of alpaca wool, she took it upon herself to knit me an alpaca hat! She gave it to me at ConFusion. It is soft and warm and pretty. (not to mention impressively constructed) 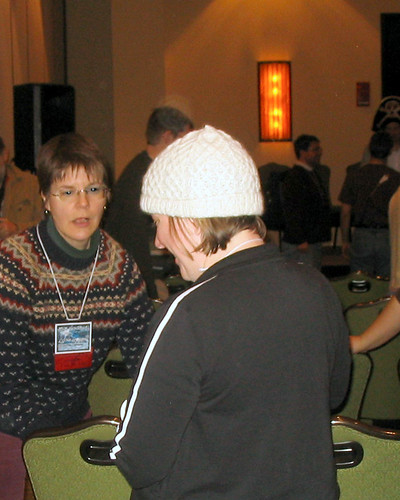 I love my alpaca hat, one of my most tangible connections to my spiritual totem. Whenever I wear it, it is like a big alpaca hug. Around my head.

In conclusion: I believe that the above two stories and photos are strong evidence that the alpaca is my spiritual totem. Not only have I noticed it, but other people in my life have remarked and acted upon it.
Collapse