They went out for sunday brunch buffet. They were just starting "Round Two: The Syrup Round". She was preparing her waffle as they chatted.

She was rambling away about something mundane when she noticed that the other side of the table had grown silent, and her conversation one-sided. She glanced up.

He was staring at her plate, shaking in silent mirth. She looked down at her hands then grinned with embarrassment. She was holding a little pat of butter in her left hand and a knife in her right hand. Without thinking about it, as she had been speaking, she had methodically been using the knife to carefully extract a tiny dab of butter to be placed individually in each hole of the waffle.

She shrugged helplessly. "Um. They taste best, you see, when each hole has the appropriate ratio of butter and syrup...."

"You're wonderfully quirky, you know that?"

"Well, yes. And neurotic also; I hope you like that. But here, taste this." And she cut him a bite, ignoring his protests that his french toast was sufficient, thank you very much.

He sighed, picked up the piece of waffle, and chewed meditatively. She raised her eyebrows encouragingly. "See? See?" 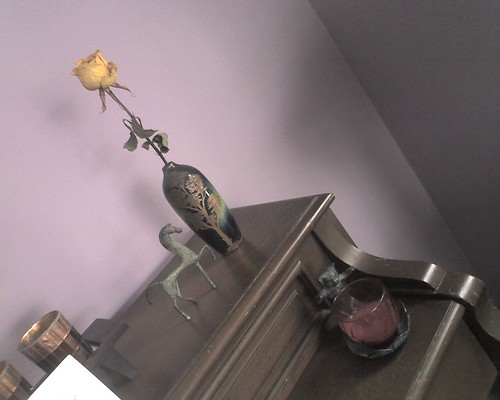 Dried Rose
Originally uploaded by javagrl.
I'd say it (the drying effort) worked pretty well. The old one I had in that vase was looking fairly bedraggled, so I'm glad to be able to replace it.
Collapse