13. Star Soldiers, by Andre Norton (An e-book free from Baen. I accidentally downloaded the HTML version instead of a Palm version. Fortunately I can read html, but it did make reading it a bit more challenging. I got a bit confused because I didn't realize there were two books here, not just one. Both were decent sf, nothing 'wow' but I liked them.)

12. The Road, by Cormac McCarthy (Another Pulitzer prize winner: I figured that's a good way to pick books. This is a stark depiction of a man and his son's struggle for survival in a post-apocalyptic future. Painfully sad portrayal of humanity sinking to savagry, yet at the same time it has visions of human spirit and survival that are beautiful. "There is no God, and we are his prophets." Recommended.)

Unrelated except that this is an excellent place in which to read books: I picked up new bedding at Bed Bath and Beyond, and managed to get out of there only making a few unplanned purchases. (That's hard, because what an addictive store!)

Somebody asked me today, "Did you know you needed new towels before you went to BB&B, or only when you saw them there?" Well... it was only when I saw them that I realized I could not do without them. That's the danger of this store.

But I do like my fluffier and bigger new towels. And my new shower curtain. And my new bed! Review after test-sleeping it for two nights: quite comfy. Recommended by people and cats everywhere. 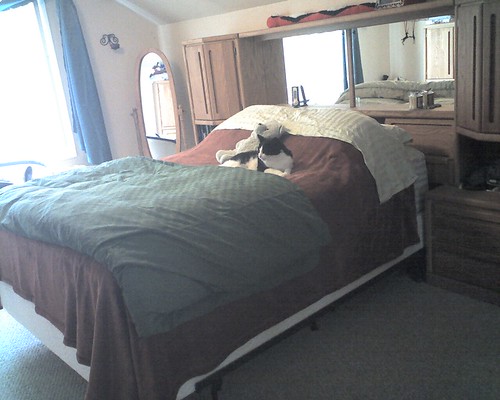 More quotes from The Road:

"He could not construct for the child's pleasure the world he'd lost without constructing the loss as well and he thought perhaps the child had known this better than he."

I had a good weekend. Got some stuff done around the house, went to a Derby and birthday party, saw a funny movie (Forgetting Sarah Marshall), had a good breakfast this morning, went for a 15 mile bike ride in beautiful spring weather.

It was the first time this year pulling my road bike out this year -- been too busy with running and/or regular life. I have ridden my city bike around town a couple of times this year already, but this is the first time I put on my "gear*" and rode the fast bike. It was fun, although my sit-bones are already hating me. Breaking in the butt is the hardest part of getting back on the bike in the Spring.

We'll see how much my muscles hate me in the next day or so. I don't think it'll be bad; I didn't push myself or anything. Just wanted to get out there and feel the pedals and the seat (ouch, the seat!) again. My knees felt fine after the first mile, so that's cool.

Wednesday I'm going to try a club ride, which will be 25 miles, and hopefully not tooo fast. They probably have all been on their bikes many times already this year, so we'll see if I can keep up, and how I'll feel when it's through! Yikes. Should be fun though: social riding is generally nicer than solitary.

*By "gear" I mean the squishy shorts, gloves, helmet, and clip-in shoes. I picked up one of those fancy camelback water backpacks awhile back on clearance at REI, but haven't given it a try yet.

As Jer pointed out, we need to get Team Alpaca back together and do some more fun bike-related stuff. With that in mind, I have created the

Who is Team Alpaca? The founding members are the folks who rode in the Blue Water Ramble last October. I've already invited them to join the community. Additionally, I've added others who have been on alpaca-related bicycle rides with me, and then I decided that really anybody who's ridden a bicycle with me can and should be grandparented into Team Alpaca.

Anybody IN Team Alpaca who wants to invite anybody with whom THEY have ridden a bicycle is more than welcome to do so. Also... really anybody who wants to can join. The more the merrier, really, my rules aren't that strict.

The point is, social bike-riding is a ton of fun, and we need to do it more! Team Alpaca must ride again.

Anybody bored today? I'd like to unleash your creative freedom. Feel like playing around with a Team Alpaca logo? I have a concept in mind, but minimal time and limited graphics editing skillz. So if you feel inspired, please feel free to jump in.

Here is my concept, masterfully edited in ms paint: 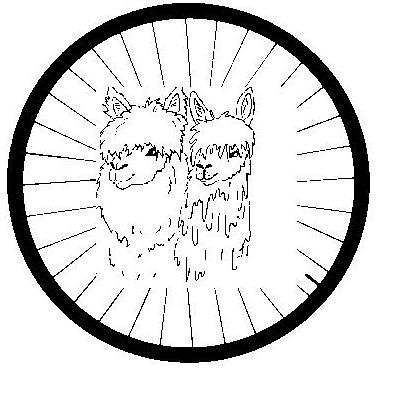 The idea is of an alpaca or two in a bicycle wheel. It'd need to say Team Alpaca in there somewhere, possibly around the wheel? I found a cool "in motion" kind of wheel image somewhere -- you know, the kind with lines coming out of it to indicate movement -- but have lost it. This one I found is rather small and minimal, but it conveys the idea....

Feel free to be creative, but there is one caveat for it to be usable: I'm hoping to make shirts at some point, so the logo needs to be screen-print-able. Black/white only - no gray-scale or color, and it'd need to be scalable to shirt-size.

That said, this is all really just for fun. If you just want to let loose and go crazy, that's cool too. *grin* Entertain us!

[Edit: Oh, this is a fun site!]
Collapse